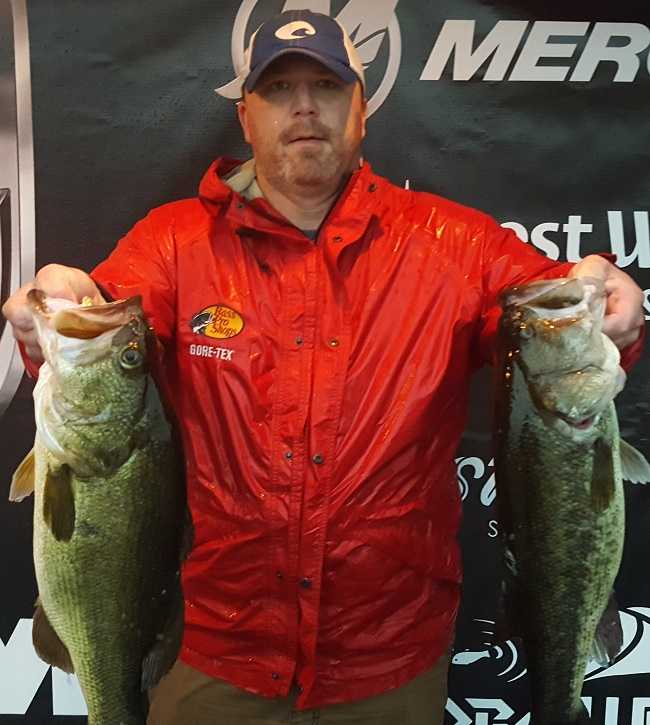 Running out of Chandler’s Camp near Campti, LA, Brent pulled out a five-fish limit weighing 26.39 pounds anchored with a 6.53 pound kicker.  For the Boater Division victory, Carpenter took home a check for $5000.00

“I didn’t get a chance to practice at all this week because I couldn’t get out of work.  I had fished a club tournament the weekend before and went to the same area.  I only had 16 pounds last week but figured if they were still there I could catch a limit.  I fished there again and caught 2 good ones early swimming a jig just off the channel.  Nothing else happened so I went looking around.  I came up to one stretch about 50 yards long and caught 3 more good ones flipping a black neon beaver.  I had all of them by 10:30 that morning and never culled up.”  said Carpenter.

In second for the boaters, Mike Bock of Meraux, LA landed a five-bass limit locking in the scales at 22.96 pounds.  He collected $500.00 for the effort.

“I figured something out Friday during practice that was surprising, I could only get bit on one bait and I stuck with it all day.  A buzzbait.  I probably caught over 25 fish and it lasted all day long.  I went through a lot of smaller fish but the bite really turned on for me around 11:00.  That’s when the big girls woke up.  I culled about 3 times but in between there were a lot of fish that I knew right away wouldn’t help.  You had to make sure you bumped the tree to get them to strike the bait and I threw a few times at the same tree before they would nail it.  I saw a lot of guys throwing spinnerbaits but I couldn’t get them to bite so I stuck with the top-water all day and it paid off.”  Said Bock.

“I ran a little south down around clear lake and fished 8-10 ft trees.  I probably caught around 15 throughout the day.  All of them were 2 lbs or better so I knew I was in a good area. I stayed deep knowing that the fish had all spawned out I culled 3 or 4 times but several of the fish I caught were no help. My bites were mostly away from the trees too.  I didn’t get many bites at all right on them.” Said McMillan.

In fourth, James Williams of Jonesboro, LA came in with 19.54 lbs.

Finishing 5th was Cole Garrett of Winnfield, LA with 19.16 pounds.

The biggest bass for the boaters was also caught by Brent Carpenter weighing in at 6.53 pounds He took home an additional $330.00 for the big bass.

In the Co-Angler Division, Jerry Strother of Glenmora, LA tipped the scales with 3 fish weighing 10.65 pounds. He victory was locked in with a 4.44 pound kicker to take home a check for $850.00.

“I had a decent practice last week flipping a jig but the fish didn’t want it today. We started shallow and couldn’t get bit so went deeper.  I threw flukes in open water and managed to get strikes.  You had to reel the bait slow in the middle of the pockets to get bites but I managed to catch around 10 or 12 fish.  When the sunlight come out they stopped biting.  I was culling before 8 o’clock and by 9 I had finished out.”  Jerry said.

Taking second for the co-anglers, Steve Meche of Pineville, LA with a three-bass limit weighing 9.01 pounds. He collected $250.00 for the effort.

“I used one rod all day long.  I threw a jig with sapphire blue trailer and that was it.  We targeted water in the 6 to 7 ft range just off the creek channel.  I caught 5 or 6 fish throughout the day and just before we had to come in I caught a 3 lber and culled one that was 1.84lbs.” Said Steve.

Chad Pitre of Opelousas, LA had a solid weight for third weighing in 8.86 pounds.  Chad anchored his bag with a beauty weighing 6.19 lbs.  Chad took home a check for $200.00

“It was a long day until I got my first bite.  I threw a jig all morning and didn’t get any bites.  I finally picked up a chatter bait and caught my first fish.  I looked down at my watch and it was 12:10.  About 30 minutes later I had made a cast and was about to pull my bait out of the water to make another and saw a flash of white.  The fish hit my bait right at the boat just as I was about to pick it up.  I hollered ‘NET’ to my boater and before he could reach for it my excitement got the best of me and I flipped it in the boat.  She weighed 6.19. I couldn’t believe how fast it happened.  The first thing that came to mind is that I wasn’t in the big bass pot.  Chris asked me about it last night and I chose not to get in it.  That won’t happen again!”  Said Pitre.

Bryan Aguillard of Brusly, LA rounded out the top 5 with a weight of 8.54 pounds.