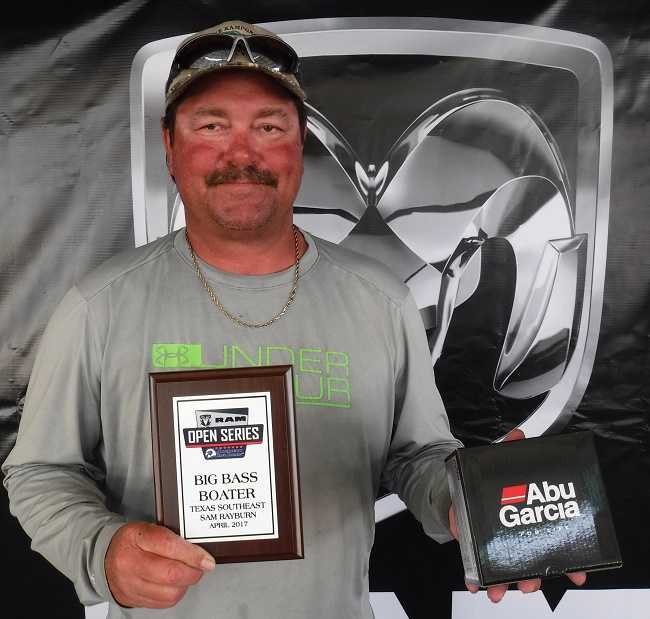 Running out of the Umphrey Pavilion near Brookland, Texas Alan did it again with a five fish limit weighing 27.96 pounds anchored by a beautiful 8.72 pound kicker. For the Boater division victory, Fitts took home a check for $5,000.

“What an amazing day,” Fitts said. “I couldn’t have scripted this day any better. I had some time to practice this week and there is cove I thought of that had some females still on beds. I know its late in the season for it but I caught a fish over 6 lbs there earlier this week that had not spawned yet. I left it alone for a couple days and went back this morning. My third cast landed me one of the three big ones. A little while later I stuck another one. I was catching them on that same Talon football jig. The same one I used on Toledo Bend last month and I still can’t tell you the name of the color because we STILL haven’t named it… I left that spot and went back later in the day and managed to catch the third big one that put me over the top.” Alan had three bass in his bag that weighed over 24 pounds together. The other two were keepers but were dwarfed by the rest.

In second for the boaters, Albert Collins of Nacogodoches, TX landed a five-bass limit weighing 22.40 pounds. He collected $1,250 for the effort.

“I am surprised with what I had today. I caught fish everywhere I went and was expecting to come in with about 16 pounds. I was lucky to get a couple of better bites than I had found in practice and put them in the boat. I had a feeling the better fish were there so I stuck with it and managed to get them.” Collins said.

“I really enjoyed fishing today.” said Don. “I didn’t run too far. I had a couple spots picked out that I was going to fish and they were there. I had one fish that really helped my weight.  She was over 8 pounds and any time you can get one that size it helps quite a bit. I thought I might be able to get on a couple more good ones that would have put me on top but they never bit. All in all it was a good day though.”

In fourth, Thomas McMillan of Choudrant, LA came in with 19.98 pounds.

Finishing 5th was Kris Wilson of Montgomery, TX with 17.73 pounds.

The biggest bass for the boaters was caught by Allen Fitts of Hemphill, TX that weighed 8.72 pounds. Alan pocketed $630.

In the Co-Angler Division, James Bailey of Farmerville, LA swamped the scales with 3 fish weighing 15.64 pounds. He victory was locked in with a 7.99-pound kicker to take home a check for $1,600.

“I had a great guide.” said Paul. “There wasn’t much to it really. My boater took us to fish, and I caught em.  I had a great day with Clayton.  He’s a great guy.  The 8 lb’er was the first fish I caught this morning and that set the tone for the rest of the day.  When you can get one like that to start things out it makes the day go a lot easier. We both caught fish, I was just able to get the right bites.” Bailey said.

Taking second for the co-anglers, Jason Prestridge of Paradise, TX brought in a three-bass limit weighing 11.53 pounds. His bag was anchored with a 5.65 lb kicker. He collected $600 for the effort.

“I had a pretty good day. I caught a couple keepers early. Things slowed down a little for us as the day went on but all in all I happy with the way it turned out. We caught fish pretty much everywhere we went. I caught about 6 fish, my boater had about a dozen. It was a good day and I had a lot of fun.” Prestridge said.

Donnie Davis of Livingston, LA and Robert Kell of Conroe, TX tied for third both having 10.16 pounds. Kell had a 4.85 to anchor his bag. Each of them took home a check for $375.

Ronnie Gibson of Trinity, TX finished in fifth place with three bass at 8.22 pounds anchored by a 6.03 kicker.

The biggest bass for the co-anglers was caught by James Bailey at 7.99 pounds. James took another check for $270 for his fish.

Slated for May 27th, the next divisional tournament will be held on Toledo Bend, at Fin and Feather Resort near Hemphill, TX.  At the end of the season, the best anglers from across the nation advance to the 2018 Ray Scott Championship, slated for pool 5 on the Red River in Bossier City, LA.

American Bass Anglers is committed to providing low cost, close to home tournaments for the weekend angler and at the same time offer each competitor an upward path for individual angler progression. For more information about American Bass Anglers, the Ram Truck Open Series, the American Fishing Tour or the American Couples Series, visit www.americanbassanglers.com.