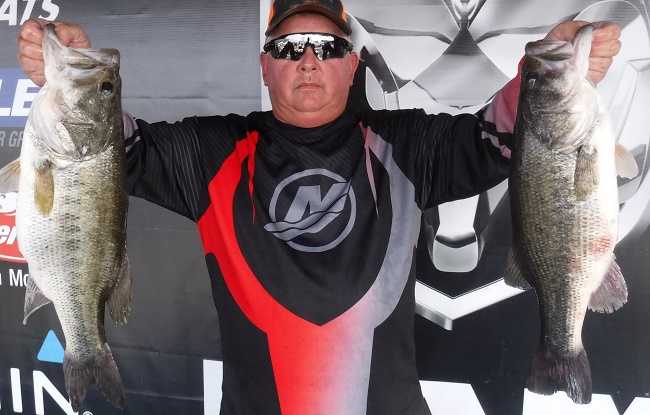 Running out of The Villages Marina near Noonday, Texas the Bogota, Texas angler caught an awesome five fish limit weighing 22.41 pounds. For the Boater division victory, Allen took home a check for $5,000.

“I was boat 57 today. I went to Flat Creek. There was a bit of a crowd in there so I took my time working my way through them. I picked a couple up on a frog but once I got back to where I wanted to be I did most of my damage on a chatterbait. I think there was a shad spawn going on and I caught them all morning. I probably caught about 20 fish. It turned out to be a real good day.” Allen said. Michael also earned $1,000 from Mercury Outboards.

In second for the Boaters, David Gillham of Heath, Texas landed a five-bass limit for 21.34 pounds. His bag was anchored by a 6.76-pound kicker. He collected $1,050 for the effort.

“Well, caught a 5-pounder on a bed yesterday. I went back to her first thing this morning thinking it would be a good way to start the day and couldn’t get her to bite. I made a fan cast from there and caught one around 6 pounds. I made a few more casts and caught another one that was over 6 pounds.  Probably the big bass I had. I left that area and went to a few other spots to fill out my limit but that 5 lber was still on my mind. I didn’t think I had caught her so I went back. I flipped up to the bed and my line started swimming off. I set the hook and my line broke… So, I didn’t get her but if I hadn’t found that fish I wouldn’t have caught the other two? It is what it is but it turned out well.” Gillham said.

In fourth, John Maxey of Tyler, Texas came in with 19.42 pounds.

The biggest bass for the Boaters was caught by David Gillham that weighed 6.76-pounds. Gillham pocketed $560 for his fish.

In the Co-Angler division, Jeffrey Grubbs Sr. of Goodrich, Texas topped the Co-Anglers. Jeff had three bass weigh in at 8.34 pounds. He anchored his bag with a bass weighing 3.61 pounds to pocket a check for $1,200. 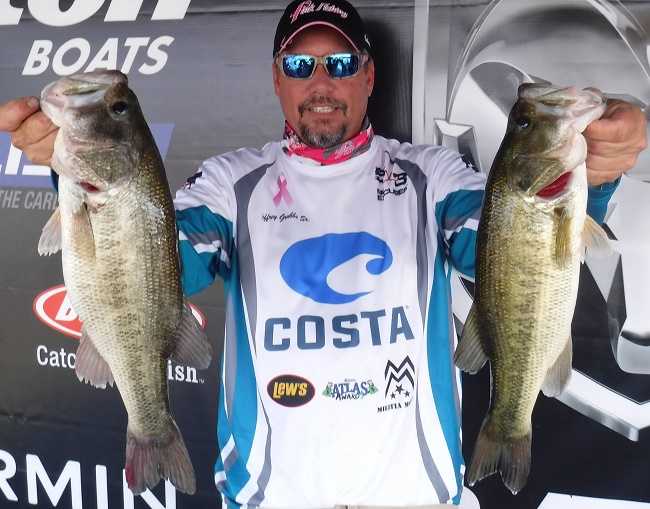 “Well, we ran up North, fished shallow, and I did not have a fish in the boat until noon. Once I was able to break the ice with the first one I started getting bites and was even able to cull a couple. I picked up one here and one there and I am obviously happy with the outcome.” Grubbs said.

Taking second for the Co-Anglers, Martin Montfort, of Corsicana, Texas brought in two bass weighing 6.42 pounds anchored with a 4.73. He collected $400 for the effort. “Man, what a tough day. I had one bite that made all the difference today with my big fish. I didn’t think I would be up here finishing 2nd over these guys and one shy of a limit so it was obviously tough on everyone. Windy all week and today was almost picture perfect weather but I am happy with the outcome.”  said Marty.

Jason Prestridge of Paradise, Texas placed third among the Co-Anglers with three bass going 5.55 pounds to earn $350. “Pretty slow for the most part. I didn’t have anything until 30 minutes before we came in. I threw a crankbait around some chunk rock and caught one, got the next one on a dock, and managed one more keeper just before we came in. My entire day happened that fast.” said Jason.

In fourth place among the Co-Anglers, Brandon Foard of Flint, Texas brought in two bass for 4.74 pounds.

Michael Nantz of Ben Wheeler, Texas finished in fifth place with two bass at 4.47 pounds. Both anglers are from Farmerville, Louisiana.

The biggest bass for the Co-Anglers was caught by Martin Montfort at 4.73-pounds. Marty took home another check for $185 for his fish.

Slated for May 20th, the next divisional tournament will be held on Lake O’ The Pines, launching from Johnson Creek Ramp, near Avinger, TX. At the end of the season, the best anglers from across the nation advance to the Ray Scott Championship, slated for April of 2018 on the Red River in Bossier City, LA.