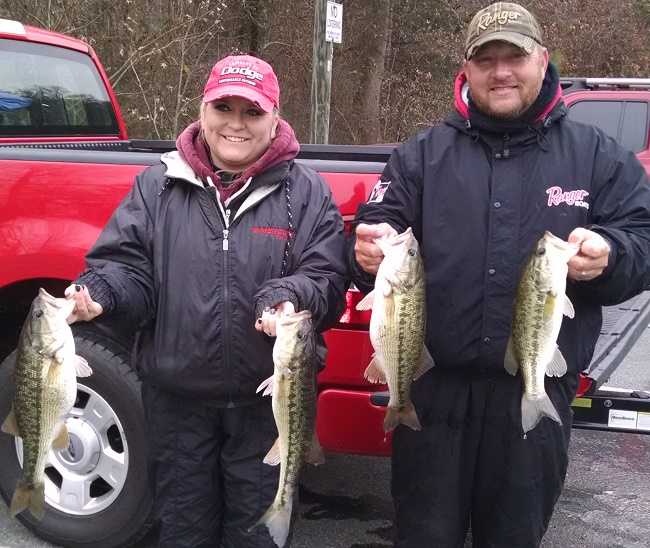 Michael and Danni Fox of Statesville, North Carolina won the second event for North Carolina D4 Couples Trail on Mountain Island Reservoir near Charlotte, North Carolina on December 17th, 2016. The Team took first place with a bag weighing 11.16 pounds which included a 3.14 pound kicker. Michael and Danni were a new couple for division 4. We would like to welcome them to the family. This was they’re first time fishing a tournament together and it was a good one for them as they took first place.

David Gunderman and Elizabeth Bank came in third with a total weight of 9.23 pounds.

It was a balmy 28 degrees at take off with water temperatures in the low 50’s. The weather forecast all week had been calling for freezing rain and sleet the morning of the tournament. Leisa and I struggled with the decision of postponing the tournament for safety reasons. As it turned out, the bad weather missed Mountain Island all together and it reached the upper 40’s by 11:00 am. Everyone had a great time. There were 32 bass weighed in with a total weight of 54.18 pounds. All 32 were released alive.

Nine couples braved the weather to join us. We would also like to welcome the teams of John and Angela Mayo and JD and Karan Barber back this year. We all missed them and were happy to get to spend time with them again.

We would like to thank everyone who came out for the tournament and extend an invitation to anyone that would like to join our family of fishing couples to contact us and become part of a great group of friends. North Carolina Couples will hold their next tournament in February 2017 on Lake Norman near Mooresville, North Carolina. Take off will be from McCrary Creek Access Area just off Hwy 150 at 8:00am. The safety meeting will begin at 7:30am at the landing. Please check the ABA website for the specific date of the tournament, it will be posted soon.

For more information on this event, or any future events for this division, please contact Keith and Leisa Morgan at (828)659-4268 or email at [email protected]

All ABA American Couples Series events involve a team format with each team composed of one man and one woman. Contestants between the ages of 14 and 16 years old may participate with a parent’s written permission.