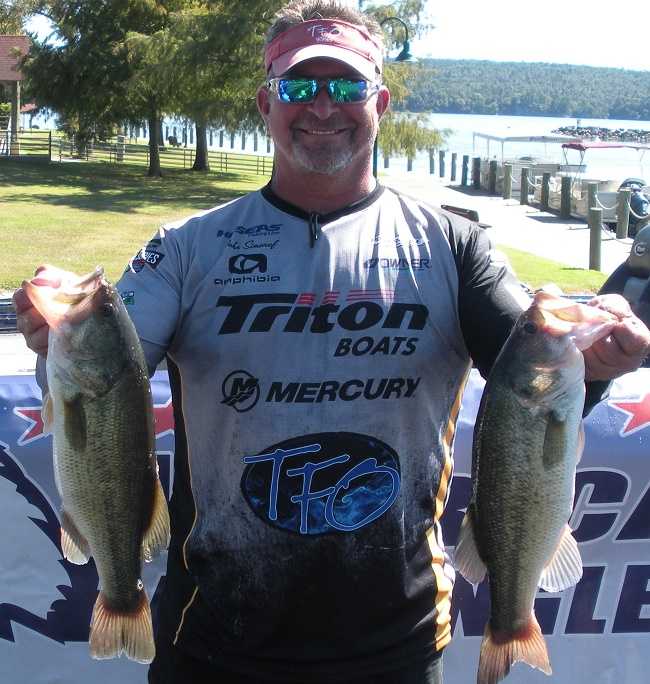 John Simonof of Jacksonville, Arkansas wont the final two day event of the AFT D42 season held on September 10th and 11th on Lake Dardanelle. John topped the field with eight fish for a total weight of 18.55 pounds. He also caught the Big Bass for day one weighing in at 2.74 pounds. John threw a homemade vibrating jig and 1/2oz jig poured on Owner hooks and fished on Temple Fork Outfitter rods, Lew’s Speed Spools, and 20# Hi-Seas Quattro fluorocarbon line to haul in his fish. John took home a check for $576 for his efforts.

Arnie Hanson of Sherwood, Arkansas came in second and sacked up nine fish for a total weight of 15.18 pounds. Arnie relied on soft plastics to fill his livewell.

Rounding out the top three was Gary Hubble who threw a variety of baits to catch seven fish for a total weight of 13.87 pounds. Gary also caught the Big Bass for day two weighing in at 4.14 pounds.

A hot day one started off with a short storm followed by strong winds giving way to a cool morning and bright skies with light winds on day two. No five fish limits were brought to the scales on day one but several anglers figured something out and filled their limits on days two.

Angler of the Year
John Simonof was the most consistent angler fishing Division 42 this year and earned the D42 Angler of the Year title. John will represent D42 in the AOY competition during the National Championship at Lake Eufaula, AL in October and compete against all others divisional AOYs for a new Triton/Mercury package.