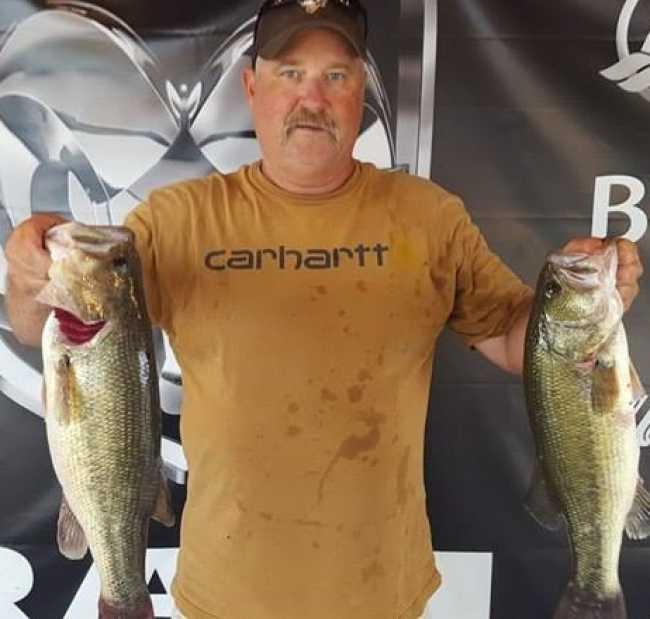 Running out of Taylor’s Ferry North near Wagoner, Oklahoma, Randy caught five bass weighing 18.40 pounds. He completed his winning bag with a 4.98 kicker. For the Boater division First Place victory, Weatherford took home a check for $5,000.

"I just started fishing this lake this year, I moved here from Alabama. I launched at an unfamiliar ramp during practice and hit something with my prop. I didn’t think anything was wrong but once I got on plane I couldn’t go over 50 MPH. I want to thank Mr. Don Turner for helping me out. He lives here in Wagoner and loaned me a prop and a hub so I could fish today. I caught some really nice fish in practice on a spinnerbait down lake. I fish the AFT and go up river so after the cloud cover rolled in late in the morning I figured we could go try it. The first fish was 4 lbs on spook. Spinnerbait didn’t work so I started flipping laydowns and limited out. My Co-Angler caught twice as many as I did but they were not the same quality. We left and came back down lake to hit some docks and I caught a nice one on a spinnerbait to cull my last keeper at 3 pm," stated Weatherford.

In second place on the Boater side, Ryan Wilbanks of Wagoner, Oklahoma brought in five solid fish, putting him in the runner-up position with a weight of 17.43 pounds. He collected $1,247 for the effort. "I have been practicing the last few days just a few hours each day when I had time. I don’t live far from here so I could get away to fish just for a bit and I would find a couple spots. I caught six keepers today, all on a jig and I did cull up with the last fish. I caught the first three right off the bat then went 4 or 5 hours with nothing, then 3 more rather quickly," Wilbanks stated.

Jeff Dobson from Ponca City, Oklahoma landed in third for the Boaters with five bass weighing 16.89 pounds. He completed the day to earn a check for $838. "Today did not start off well at all.  At 11 o’clock my Co-Angler and I only had one fish a piece. I was committing to offshore fishing and it just wasn’t working so we started trash fishing and stumbled across a few keepers. That’s basically how the day went," Dobson stated.

Coming in at fourth place was Kirk Smith of Edmond, Oklahoma bringing in a 5-fish bag weighing 14.11 pounds.

Fifth place award was taken by Jeremy Johnson of Henryetta, Oklahoma with a total bag weight of 13.29 pounds.

The biggest bass caught on the Boater's side was caught by Harmon Davis, who reeled in a 5.66-pound bass. That single catch earned Davis an award check of $530.

In the Co-Angler Division, David Caldwell from Coyle, Oklahoma won First Place with three bass weighing 9.79 pounds. He sealed his victory with a check for $1,395. 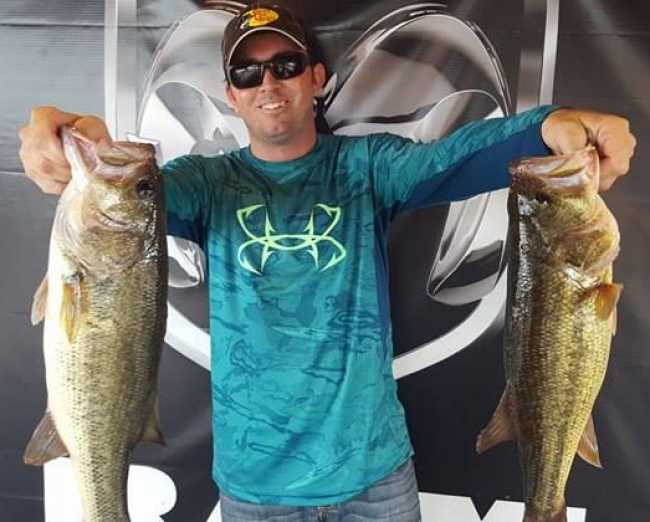 "It was a slow day for us. We caught them during practice on a pattern that just didn’t pan out for us today so we hit the banks and started throwing topwater. The clouds didn’t come in until later in the afternoon and that really helped. This morning there was a bright sun, and the stars and moon were out when we took off. I was able to cull one time and it was just enough," stated Caldwell.

Taking second for the Co-Anglers, Jerry Watson from Tahlequah, Oklahoma only brought in two fish for the day but made them count. His bag weighed in at 9.42 pounds with a 4.72-pound kicker that earned him the biggest bass on the Co-Angler side. He collected $478 for his second place finish and an additional $180 for the big bass award. “With only two keepers I’m pretty excited, but that third keeper would have certainly helped. I caught both of my fish on a crankbait, both of them later in the afternoon," stated Watson.

16-year-old Tate Brumnet of Wagoner, Oklahoma placed third in his first-ever tournament with three bass weighing 8.91 pounds held up with a 3.79-pound kicker. His catch helped him to earn $318. “I had a great Boater today. We were targeting rock piles in 8-10 feet of water and I caught all my fish on a jig. This was a lot of fun and I hope to be back next year,” Brumnet stated.

In fourth place among the Co-Anglers, Derek Thurman of Collinsville, Oklahoma brought in three bass weighing 8.04 pounds with a 3.76-pound kicker.

Slated for October 29th & 30th, the next tournament for this division is the two day Area Championship, which will be held on Lake Texoma out of Highport Marina near Pottsboro, Texas. At the end of the season the best anglers from across the nation advance to the 2017 Ray Scott Championship, slated for Old Hickory Lake in Hendersonville, TN in April of 2017.