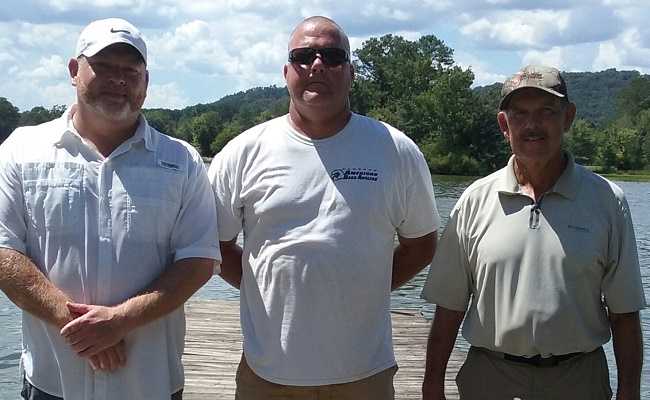 From D88, Alabama East/Central,  David Childress of Calhoun, Georgia won the Divisional Championship held on both Neely Henry and Weiss lakes Saturday and Sunday July 16th and 17th, with a total weight of 23.17 pounds. He pocketed $752 for his efforts.

Coming in second for both days was Marvin McCullough with a total weight of 21.09 pounds. He also caught the Big Fish of Day 2 weighing 6.24 pounds.

The Angler of the Year for D88 this season goes to Derrell Parker of Summerville, Georgia. The points were tied at the end of competition, but at the end of the event criteria was in his favor. We all wish Derrell good luck in the AOY final round!

The heat index was over 100 degrees both days. The water level was down by nearly a foot at both lakes. Saturday's competition on Weiss proved very unfortunate for one competitor who was thrown from his boat on the way back to weigh-in by a large boat wake and was rescued and taken to the hospital for care.  Kenny Carroll made a guest appearance from Division 99 West Point. Kenny fished this body of water for the very first time and took an early lead while pocketing Day 1 Big Fish cash with a weight of 3.84 pounds.

For more information on this or any future event in this division contact Doug Orazine at (205)910-6694.