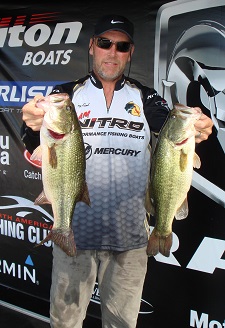 Championship at Lake Chickamauga on October 10-11, 2015. Lamb weighed in a two-day total of 29.83 pounds to take home $1050 and $300 from the High Stakes Option Pot. "I threw a frog both days. All ten fish that I weighed in were caught on a frog. I caught my better fish after 2:00 when the sun got up good. It's been a grind both days. Yesterday, I probably had 50 bites, but you don't always catch those 50 bites. I, actually, only had five keepers yesterday and I had seven keepers today. It's been a tough tournament, but it was all just mats with a frog. I did run around a good bit, but the majority of the fish came from south of Dayton Boat Dock," said Lamb.

George I. Wells IV of Knoxville, TN brought in the Boater Big Bass weighing 5.38 pounds to win the $140 from the Big Bass Pot. "I caught the Big Bass around noon today on a Chatterbait," said Wells.

Dale Pelfrey of Rockwood, TN finished the season as the 2015 Boater Angler of the Year of the Tennessee East Division.

Frank Lillig of Acworth, GA was the co-angler champion of the Chickamauga event. Lillig had a two-day total of 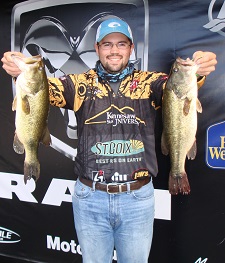 13.15 pounds to win $525 and $175 from the High Stakes Option Pot. "All of the fish that I weighed in both days came from the south end. The fish were coming from the patchy, scattered grass around the mats. Yesterday, I caught all of my fish on a black Stanley Top Toad. Today, I used a chartreuse belly/black back colored Stanley Top Toad. I was throwing my frog on a St. Croix Avid 7'4" heavy action rod to help get those fish out of the grass," said Lillig.

Scott Gibbs of Rome, GA brought in the 5.64 pound Co-angler Big Bass winning $70 from the Big Bass Pot. "I caught the Big Bass about 8:30 yesterday morning in the rain on a Spro Frog," said Gibbs.

Jared Sullivan of Hixson, TN completes the season as the 2015 Co-Angler of the Year of the Alabama South division.

Complete points standings from the 2015 Tennessee East division can be found at this link.

Lots of contingency money is up for grabs during the 2015 Ram Weekend Bass Series season. Anglers participating in the Triton Gold program can earn up to $7,000 at 2015 divisional events and up to $50,000 at the 2016 Ray Scott Championship. Anglers can also take advantage of other programs such as T-H Marine Atlas Rewards, Power Pole Captain's Cash, Garmin Grand Giveaway, Livingston Lures Cash for Big Bass, Abu Garcia Revo Big Bass Bonus, and Mercury/Motorguide bonus money.