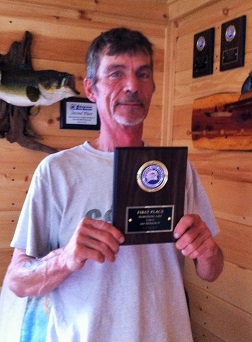 Gardner MA. Tim caught five bass weighing 9.24 pounds. For the victory, Tim took home a check for $313.  All of his fish were taken with a weightless Senko in very shallow water.  This is Tim’s fourth win this season.  His wins came in Sept 2014, June 2015, and July 2015.  He is currently in the lead for division AOY with only the two-day championship remaining.

In second among the competitors, was Dwight Dion who caught five bass weighing 8.11 pounds and pocketed a check for $128.

Conditions the entire day were excellent.  Water temps were in the 70's while the air warmed to the upper 80's.  A moderate wind was present most of the day.

With only the two-day remaining, AOY and Co-AOY titles are still attainable for multiple anglers. The points champion from each division will compete in the annual American Bass Anglers Ram American Fishing Tour National Championship on Lake Hartwell.