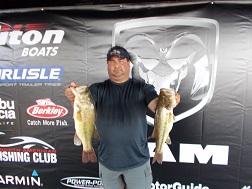 2015 at the Atchafalaya Basin out of Doiron's Landing. His winning limit of 14.01 pounds was worth $1200 for first place and $330 from the High Stakes Option Pot. "I was worried for a minute. My co-angler had a limit before I even had a keeper. I was flipping cypress trees," said Porto.

Tyler Rivet of Raceland, LA finished in second place with 12.02 pounds and had the 4.94 pound boater Big Bass winning $565 and $160 for Big Bass. "It sucked at the beginning. I didn't think that I was going to do anything and then at 1:00, it turned around after I changed baits. I caught the Big Bass on a crankbait in a cut," said Rivet.

Chad Concienne of Franklin LA won the co-angler side with 8.09 pounds. Concienne won $575 for first place and $165 from the High Stakes Option Pot. Concienne used a spinnerbait to catch four bass during the day. 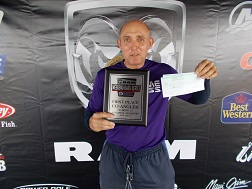 Leroy Keating of Ponchatoula LA finished in second on the co-angler side with 7.97 pounds and the 5.24 pound co-angler Big Bass winning $263 for second place and $75 for Big Bass. Keating was also awarded a new Abu Garcia Revo SX reel valued at $159.99 through the Abu Garcia Revo Big Bass Bonus program after using an Abu Garcia to catch the Big Bass of the event. "It was tough. We did a lot of punching. Basically slow, real slow. I had four keepers all day," said Keating.

Alan Yedor of Gretna LA finished in third place on the co-angler side with 7.43 pounds winning $163.

Complete result can be found at this link.

The next Louisiana South RAM Weekend Bass Series event will be held on July 18-19, 2015 at the Red River, launching from Grand Encore. More info on this upcoming event can be found at this link or by calling ABA tournament manager, Chris Wayand, at (256) 230-5627.

RAM Weekend Bass Series anglers can take advantage of the new "no linking" format along with increased payouts for the 2015 season. First place boaters can win $3000 and first place co-anglers can win $1500 with just a 50 boat field. Payouts will increase to $5000 first place boater and $2500 first place co-angler with a 100 boat field. Over the course of five divisional events per division, anglers will be competing for a spot in the 2016 Ray Scott Championship at Lake Hartwell. Payouts for the Ray Scot Championship will be huge at the 2016 event. Qualifying boaters will compete for over $200,000 in first place prizes and qualifying co-anglers will compete for over $150,000 in first place prizes at the 2016 Ray Scott Championship.

Lots of contingency money is up for grabs during the 2015 season. Anglers participating in the Triton Gold program can earn up to $7,000 at 2015 divisional events and up to $50,000 at the 2016 Ray Scott Championship. Anglers can also take advantage of other programs such as T-H Marine Atlas Rewards, Power Pole Captain's Cash, Livingston Lures Cash for Big Bass, Abu Garcia Revo Big Bass Bonus, Garmin Grand Giveaway, and Mercury/Motorguide bonus money.